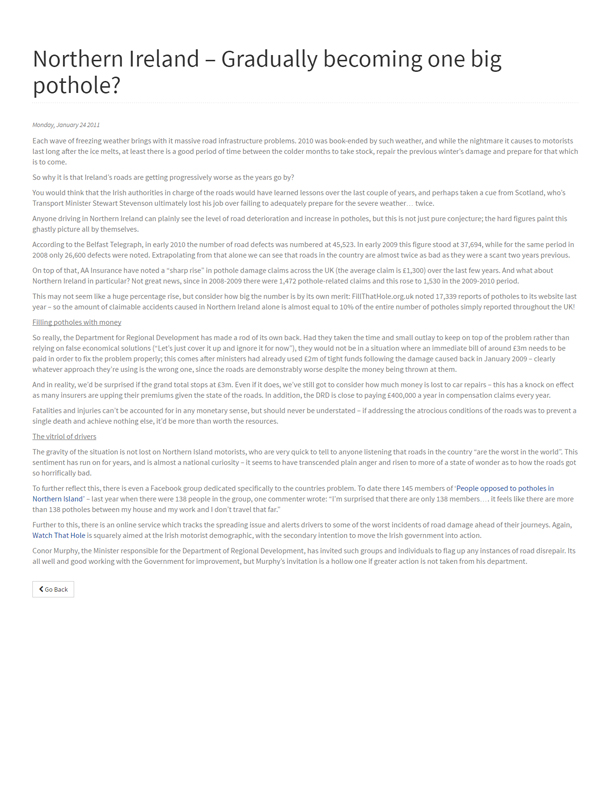 Each wave of freezing weather brings with it massive road infrastructure problems. 2010 was book-ended by such weather, and while the nightmare it causes to motorists last long after the ice melts, at least there is a good period of time between the colder months to take stock, repair the previous winter’s damage and prepare for that which is to come.

So why it is that Ireland’s roads are getting progressively worse as the years go by?

You would think that the Irish authorities in charge of the roads would have learned lessons over the last couple of years, and perhaps taken a cue from Scotland, who’s Transport Minister Stewart Stevenson ultimately lost his job over failing to adequately prepare for the severe weather… twice.

Anyone driving in Northern Ireland can plainly see the level of road deterioration and increase in potholes, but this is not just pure conjecture; the hard figures paint this ghastly picture all by themselves.

According to the Belfast Telegraph, in early 2010 the number of road defects was numbered at 45,523. In early 2009 this figure stood at 37,694, while for the same period in 2008 only 26,600 defects were noted. Extrapolating from that alone we can see that roads in the country are almost twice as bad as they were a scant two years previous.

This may not seem like a huge percentage rise, but consider how big the number is by its own merit: FillThatHole.org.uk noted 17,339 reports of potholes to its website last year – so the amount of claimable accidents caused in Northern Ireland alone is almost equal to 10% of the entire number of potholes simply reported throughout the UK!

So really, the Department for Regional Development has made a rod of its own back. Had they taken the time and small outlay to keep on top of the problem rather than relying on false economical solutions (“Let’s just cover it up and ignore it for now”), they would not be in a situation where an immediate bill of around £3m needs to be paid in order to fix the problem properly; this comes after ministers had already used £2m of tight funds following the damage caused back in January 2009 – clearly whatever approach they’re using is the wrong one, since the roads are demonstrably worse despite the money being thrown at them.

And in reality, we’d be surprised if the grand total stops at £3m. Even if it does, we’ve still got to consider how much money is lost to car repairs – this has a knock on effect as many insurers are upping their premiums given the state of the roads. In addition, the DRD is close to paying £400,000 a year in compensation claims every year.

Fatalities and injuries can’t be accounted for in any monetary sense, but should never be understated – if addressing the atrocious conditions of the roads was to prevent a single death and achieve nothing else, it’d be more than worth the resources.

The vitriol of drivers

The gravity of the situation is not lost on Northern Island motorists, who are very quick to tell to anyone listening that roads in the country “are the worst in the world”. This sentiment has run on for years, and is almost a national curiosity – it seems to have transcended plain anger and risen to more of a state of wonder as to how the roads got so horrifically bad.

To further reflect this, there is even a Facebook group dedicated specifically to the countries problem. To date there 145 members of ‘People opposed to potholes in Northern Island’ – last year when there were 138 people in the group, one commenter wrote: “I’m surprised that there are only 138 members…. it feels like there are more than 138 potholes between my house and my work and I don’t travel that far.”

Further to this, there is an online service which tracks the spreading issue and alerts drivers to some of the worst incidents of road damage ahead of their journeys. Again, Watch That Hole is squarely aimed at the Irish motorist demographic, with the secondary intention to move the Irish government into action.

Conor Murphy, the Minister responsible for the Department of Regional Development, has invited such groups and individuals to flag up any instances of road disrepair. Its all well and good working with the Government for improvement, but Murphy’s invitation is a hollow one if greater action is not taken from his department.