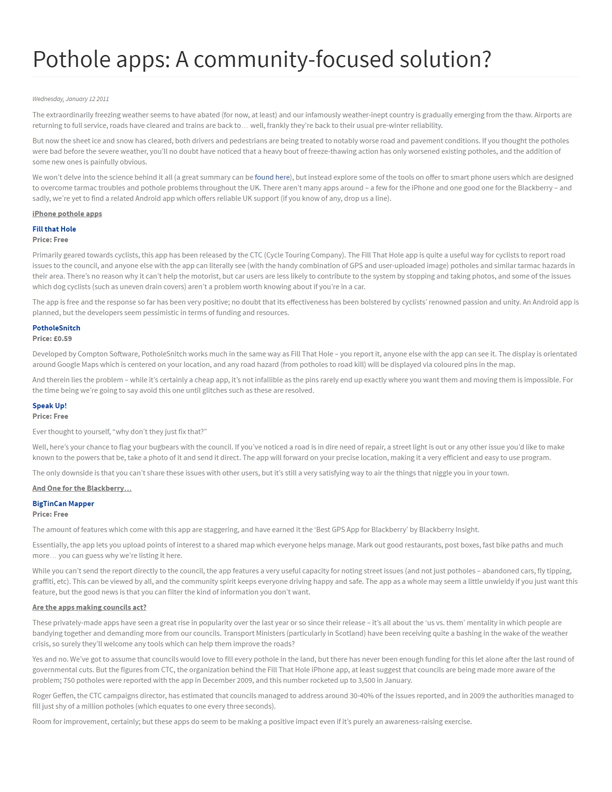 The extraordinarily freezing weather seems to have abated (for now, at least) and our infamously weather-inept country is gradually emerging from the thaw. Airports are returning to full service, roads have cleared and trains are back to… well, frankly they’re back to their usual pre-winter reliability.

But now the sheet ice and snow has cleared, both drivers and pedestrians are being treated to notably worse road and pavement conditions. If you thought the potholes were bad before the severe weather, you’ll no doubt have noticed that a heavy bout of freeze-thawing action has only worsened existing potholes, and the addition of some new ones is painfully obvious.

We won’t delve into the science behind it all (a great summary can be found here), but instead explore some of the tools on offer to smart phone users which are designed to overcome tarmac troubles and pothole problems throughout the UK. There aren’t many apps around – a few for the iPhone and one good one for the Blackberry – and sadly, we’re yet to find a related Android app which offers reliable UK support (if you know of any, drop us a line).

Primarily geared towards cyclists, this app has been released by the CTC (Cycle Touring Company). The Fill That Hole app is quite a useful way for cyclists to report road issues to the council, and anyone else with the app can literally see (with the handy combination of GPS and user-uploaded image) potholes and similar tarmac hazards in their area. There’s no reason why it can’t help the motorist, but car users are less likely to contribute to the system by stopping and taking photos, and some of the issues which dog cyclists (such as uneven drain covers) aren’t a problem worth knowing about if you’re in a car.

The app is free and the response so far has been very positive; no doubt that its effectiveness has been bolstered by cyclists’ renowned passion and unity. An Android app is planned, but the developers seem pessimistic in terms of funding and resources.

Developed by Compton Software, PotholeSnitch works much in the same way as Fill That Hole – you report it, anyone else with the app can see it. The display is orientated around Google Maps which is centered on your location, and any road hazard (from potholes to road kill) will be displayed via coloured pins in the map.

And therein lies the problem – while it’s certainly a cheap app, it’s not infallible as the pins rarely end up exactly where you want them and moving them is impossible. For the time being we’re going to say avoid this one until glitches such as these are resolved.

Ever thought to yourself, “why don’t they just fix that?”

Well, here’s your chance to flag your bugbears with the council. If you’ve noticed a road is in dire need of repair, a street light is out or any other issue you’d like to make known to the powers that be, take a photo of it and send it direct. The app will forward on your precise location, making it a very efficient and easy to use program.

The only downside is that you can’t share these issues with other users, but it’s still a very satisfying way to air the things that niggle you in your town.

And One for the Blackberry…

The amount of features which come with this app are staggering, and have earned it the ‘Best GPS App for Blackberry’ by Blackberry Insight.

Essentially, the app lets you upload points of interest to a shared map which everyone helps manage. Mark out good restaurants, post boxes, fast bike paths and much more… you can guess why we’re listing it here.

While you can’t send the report directly to the council, the app features a very useful capacity for noting street issues (and not just potholes – abandoned cars, fly tipping, graffiti, etc). This can be viewed by all, and the community spirit keeps everyone driving happy and safe. The app as a whole may seem a little unwieldy if you just want this feature, but the good news is that you can filter the kind of information you don’t want.

Are the apps making councils act?

These privately-made apps have seen a great rise in popularity over the last year or so since their release – it’s all about the ‘us vs. them’ mentality in which people are bandying together and demanding more from our councils. Transport Ministers (particularly in Scotland) have been receiving quite a bashing in the wake of the weather crisis, so surely they’ll welcome any tools which can help them improve the roads?

Yes and no. We’ve got to assume that councils would love to fill every pothole in the land, but there has never been enough funding for this let alone after the last round of governmental cuts. But the figures from CTC, the organization behind the Fill That Hole iPhone app, at least suggest that councils are being made more aware of the problem; 750 potholes were reported with the app in December 2009, and this number rocketed up to 3,500 in January.

Roger Geffen, the CTC campaigns director, has estimated that councils managed to address around 30-40% of the issues reported, and in 2009 the authorities managed to fill just shy of a million potholes (which equates to one every three seconds).

Room for improvement, certainly; but these apps do seem to be making a positive impact even if it’s purely an awareness-raising exercise.

It would be somewhat foolish of us not to mention our own app somewhere – the EZ Street cold asphalt app for the iPhone is an excellent way of seeing what our product is all about and how well it performs. With the app you can read comprehensive articles, see our cold asphalt product in action via video and learn just how easy it is to make asphalt and concrete repairs in all weather conditions (and we do mean all). The great news is that the app is free, so you have no excuse. Head on over to iTunes and try it out!