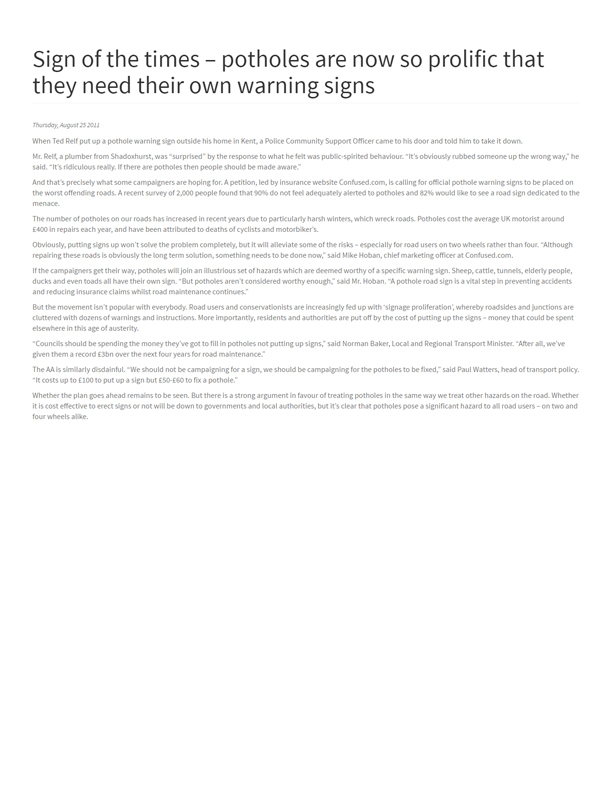 When Ted Relf put up a pothole warning sign outside his home in Kent, a Police Community Support Officer came to his door and told him to take it down.

Mr. Relf, a plumber from Shadoxhurst, was “surprised” by the response to what he felt was public-spirited behaviour. “It’s obviously rubbed someone up the wrong way,” he said. “It’s ridiculous really. If there are potholes then people should be made aware.”

And that’s precisely what some campaigners are hoping for. A petition, led by insurance website Confused.com, is calling for official pothole warning signs to be placed on the worst offending roads. A recent survey of 2,000 people found that 90% do not feel adequately alerted to potholes and 82% would like to see a road sign dedicated to the menace.

The number of potholes on our roads has increased in recent years due to particularly harsh winters, which wreck roads. Potholes cost the average UK motorist around £400 in repairs each year, and have been attributed to deaths of cyclists and motorbiker’s.

Obviously, putting signs up won’t solve the problem completely, but it will alleviate some of the risks – especially for road users on two wheels rather than four. “Although repairing these roads is obviously the long term solution, something needs to be done now,” said Mike Hoban, chief marketing officer at Confused.com.

If the campaigners get their way, potholes will join an illustrious set of hazards which are deemed worthy of a specific warning sign. Sheep, cattle, tunnels, elderly people, ducks and even toads all have their own sign. “But potholes aren’t considered worthy enough,” said Mr. Hoban. “A pothole road sign is a vital step in preventing accidents and reducing insurance claims whilst road maintenance continues.”

But the movement isn’t popular with everybody. Road users and conservationists are increasingly fed up with ‘signage proliferation’, whereby roadsides and junctions are cluttered with dozens of warnings and instructions. More importantly, residents and authorities are put off by the cost of putting up the signs – money that could be spent elsewhere in this age of austerity.

“Councils should be spending the money they’ve got to fill in potholes not putting up signs,” said Norman Baker, Local and Regional Transport Minister. “After all, we’ve given them a record £3bn over the next four years for road maintenance.”

The AA is similarly disdainful. “We should not be campaigning for a sign, we should be campaigning for the potholes to be fixed,” said Paul Watters, head of transport policy. “It costs up to £100 to put up a sign but £50-£60 to fix a pothole.”

Whether the plan goes ahead remains to be seen. But there is a strong argument in favour of treating potholes in the same way we treat other hazards on the road. Whether it is cost effective to erect signs or not will be down to governments and local authorities, but it’s clear that potholes pose a significant hazard to all road users – on two and four wheels alike.