Tarmac repair – what it means to the UK 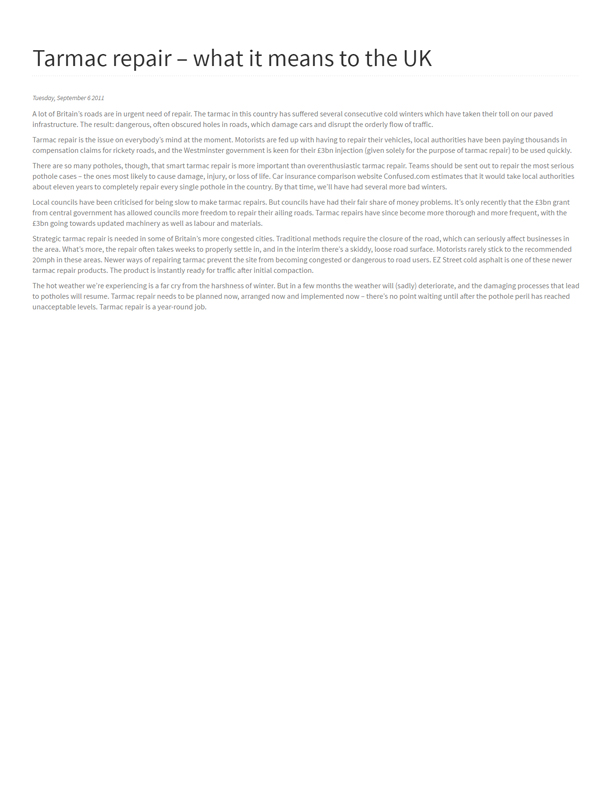 A lot of Britain’s roads are in urgent need of repair. The tarmac in this country has suffered several consecutive cold winters which have taken their toll on our paved infrastructure. The result: dangerous, often obscured holes in roads, which damage cars and disrupt the orderly flow of traffic.

Tarmac repair is the issue on everybody’s mind at the moment. Motorists are fed up with having to repair their vehicles, local authorities have been paying thousands in compensation claims for rickety roads, and the Westminster government is keen for their £3bn injection (given solely for the purpose of tarmac repair) to be used quickly.

There are so many potholes, though, that smart tarmac repair is more important than overenthusiastic tarmac repair. Teams should be sent out to repair the most serious pothole cases – the ones most likely to cause damage, injury, or loss of life. Car insurance comparison website Confused.com estimates that it would take local authorities about eleven years to completely repair every single pothole in the country. By that time, we’ll have had several more bad winters.

Local councils have been criticised for being slow to make tarmac repairs. But councils have had their fair share of money problems. It’s only recently that the £3bn grant from central government has allowed councils more freedom to repair their ailing roads. Tarmac repairs have since become more thorough and more frequent, with the £3bn going towards updated machinery as well as labour and materials.

Strategic tarmac repair is needed in some of Britain’s more congested cities. Traditional methods require the closure of the road, which can seriously affect businesses in the area. What’s more, the repair often takes weeks to properly settle in, and in the interim there’s a skiddy, loose road surface. Motorists rarely stick to the recommended 20mph in these areas. Newer ways of repairing tarmac prevent the site from becoming congested or dangerous to road users. EZ Street cold asphalt is one of these newer tarmac repair products. The product is instantly ready for traffic after initial compaction.

The hot weather we’re experiencing is a far cry from the harshness of winter. But in a few months the weather will (sadly) deteriorate, and the damaging processes that lead to potholes will resume. Tarmac repair needs to be planned now, arranged now and implemented now – there’s no point waiting until after the pothole peril has reached unacceptable levels. Tarmac repair is a year-round job.